Island of Religious, Worship and Art

Tinos is one of the biggest Cycladic islands. Aegean architecture abounds the villages and settlements. The island is considered to be an outdoor museum where its hilltops and gullies are adorned by picturesque churches and dovecotes and where windmills and stone benches are a remainder of yester years. 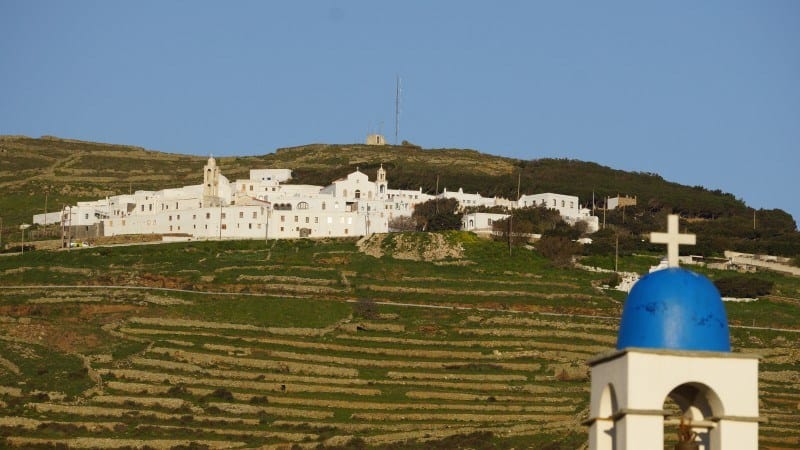 The Convent of Our Lady of Angels is situated on Mt Kechrovouni. The Convent‘s history dates back over a thousand years. The Virgin Mary appeared before Sister Pelagia in a vision and showed her the location where Her icon was buried. This is where a church of fine marble was later built in the town of Tinos.

This is one of the oldest villages in Tinos and it is built on the foothills of mount Exomvourgo. Enjoy a walk through the arches, arcades, water fountains and white houses, on the narrow cobble-stone paths. A special celebration is performed during Christmas called ‘Kavos’. 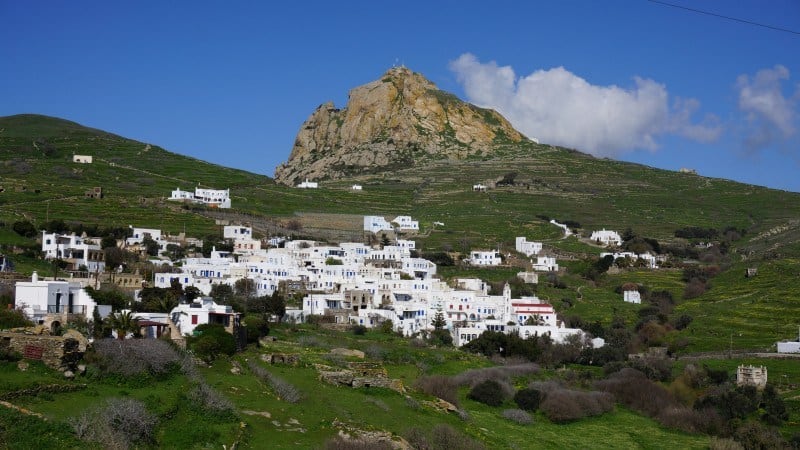 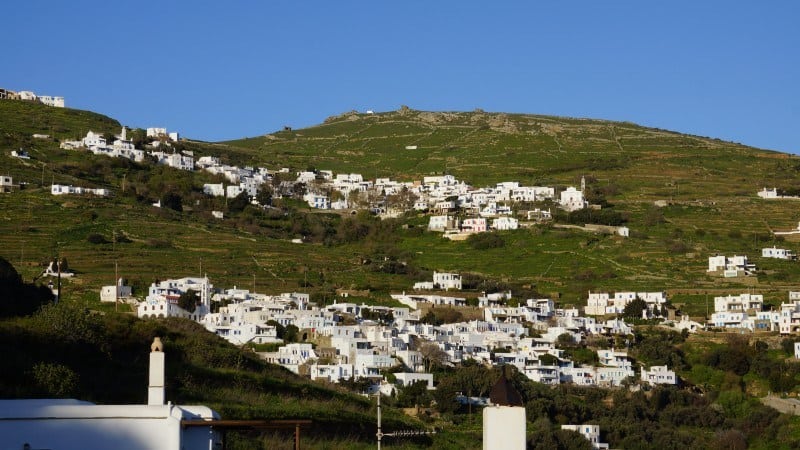 This village is built on the side of a lush green hill at an altitude of 450m. Fresh water flows from the natural spring at the entrance of the village and the view to the whole Aegean see and neighboring islands is breath taking. The 100 marble steps will take you to the village square (‘plateia’) which is shaded by huge maple trees and decorated with bougainvilleas and traditional water fountains.

This is a village whose history stretches back to the 14th Century, and where mixed farming still plays a role. Visit the Ag. Ioannis Church and view its marble ornamentation. On 25 September the church celebrates its Saint’s day and a religious festival is happening. There is also a festival in autumn, when raki, a spirit distilled from wine, is produced. 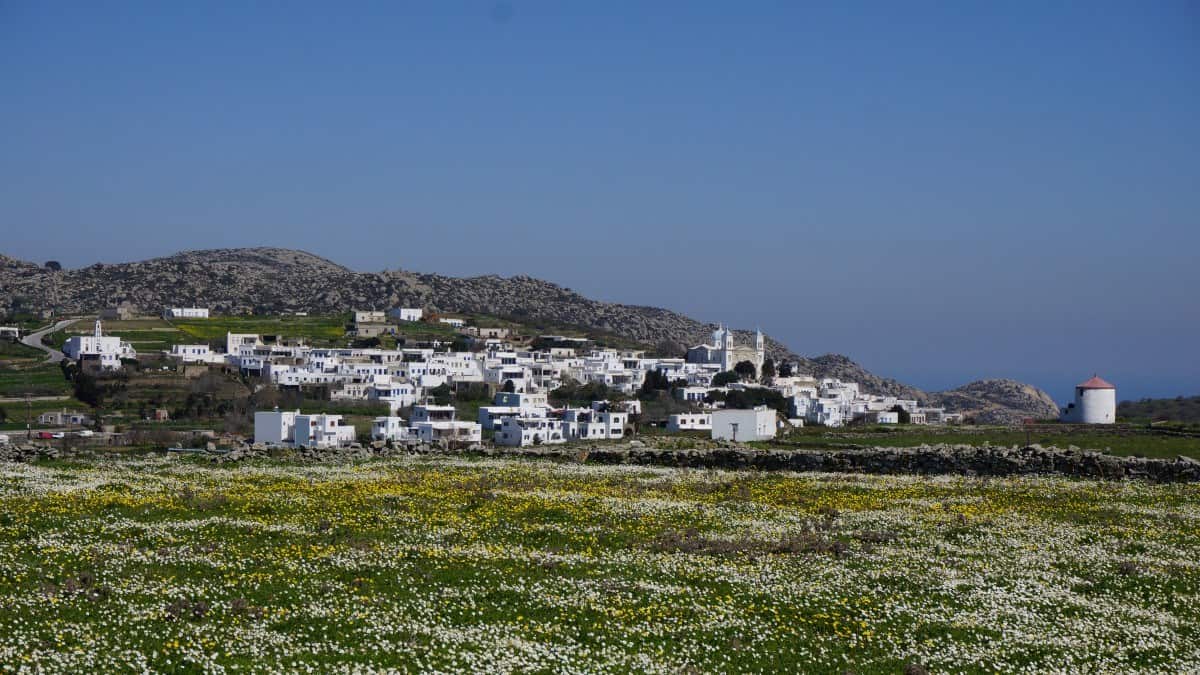 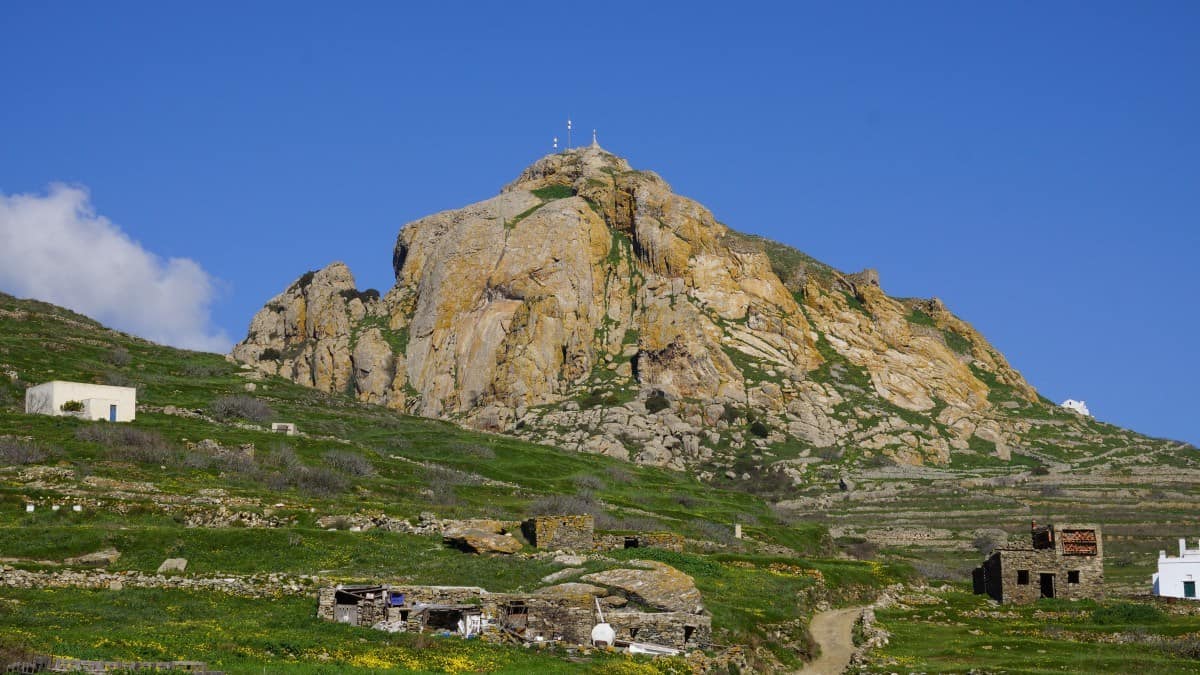 A large granite rock was a fortress and the capital of Tinos during the Venetian occupation for 500 years. A cobbled pathway leads the visitor to the top, at 600 meters above sea level, offering a panoramic view.

A village built amongst large round rocks. They are considered to be a unique geological phenomenon. In the village the art of popular basket weaving is still maintained. An outdoor theatre is also situated in the village. 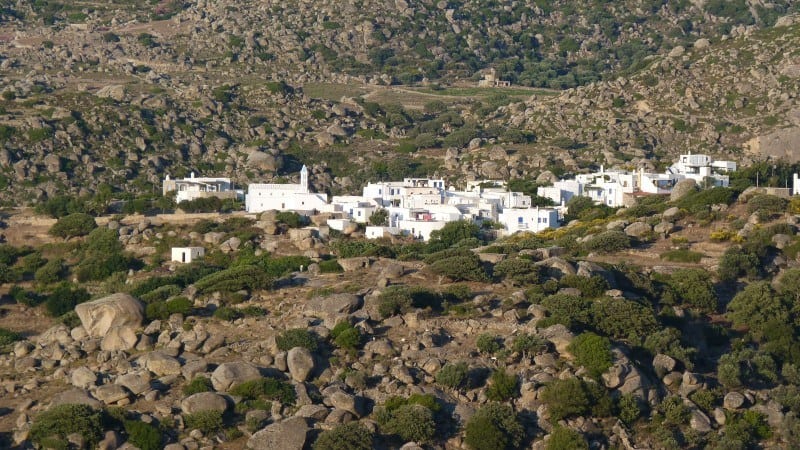 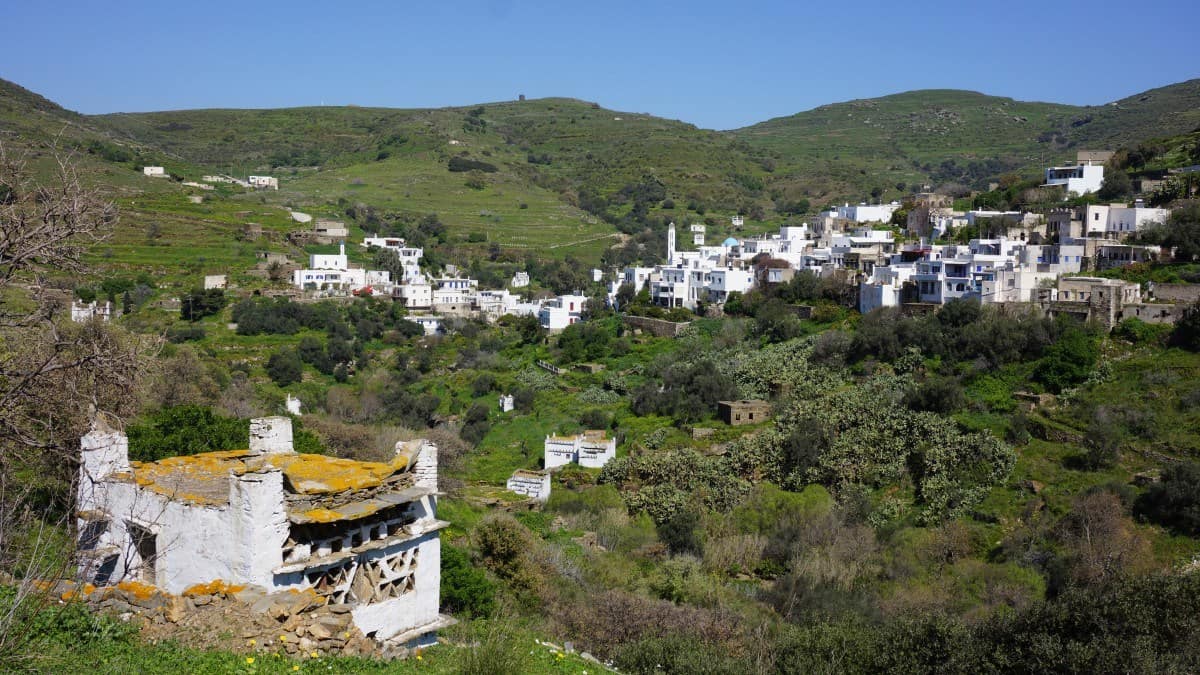 This picturesque spot is shaped like an amphitheatre at the end of a side valley adjoining the plain of Komi. One of Tinos’s most abundant brooks winds its way through the valley, which is dotted with well-preserved dovecotes. Agapi belongs to one of the most traditional villages of Tinos with its arcades and houses that have pretty lintels above their doors and windows.

A large number of dovecotes are clustered around this village. The visitor can admire popular architecture since each dovecote is unique and has a personality of its own. 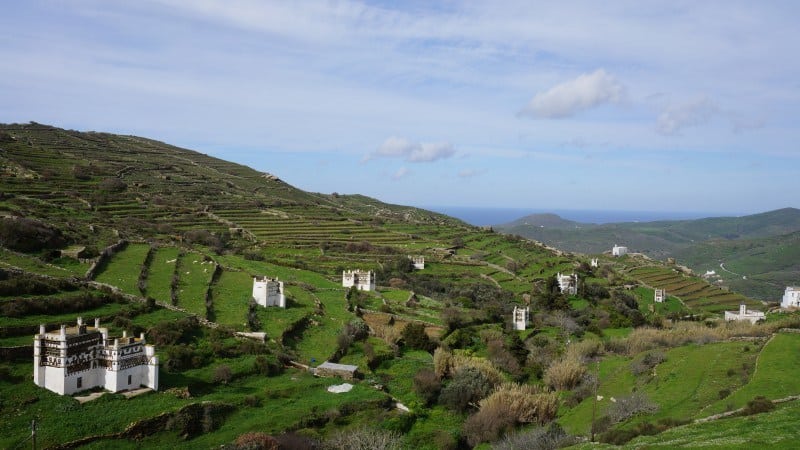 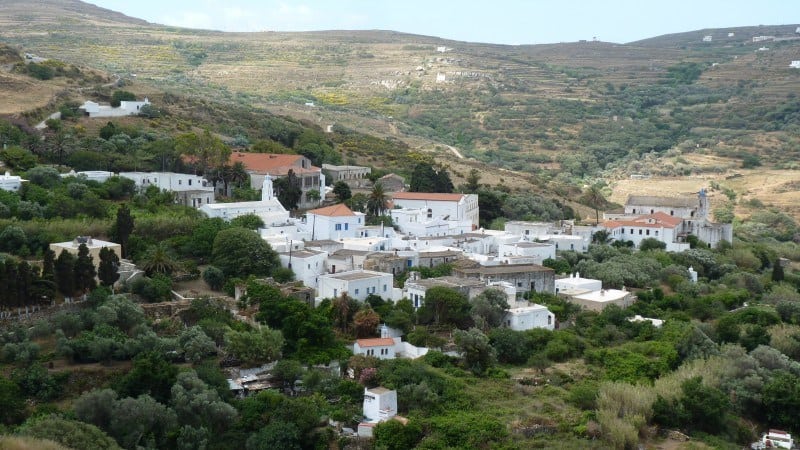 Located in a green valley like an oasis, Loutra is the home of two Catholic orders: the Jesuit Monastery and the Holy Convent of the Ursuline order with its former elementary and secondary schools in which – until 1980 –girls from all over Greece were taught. There is a folklore museum too.

Built high up on the steep southern edge of Yannaki Bay, Kardiani is a fascinating place with its breath-taking position and splendid views over the Aegean. As the area around Kardiani is one of the most plentifully supplied with water on Tinos, the village is surrounded by delightful vegetation. Kardiani has two churches to visit and a pretty footpath leads down to the beach. 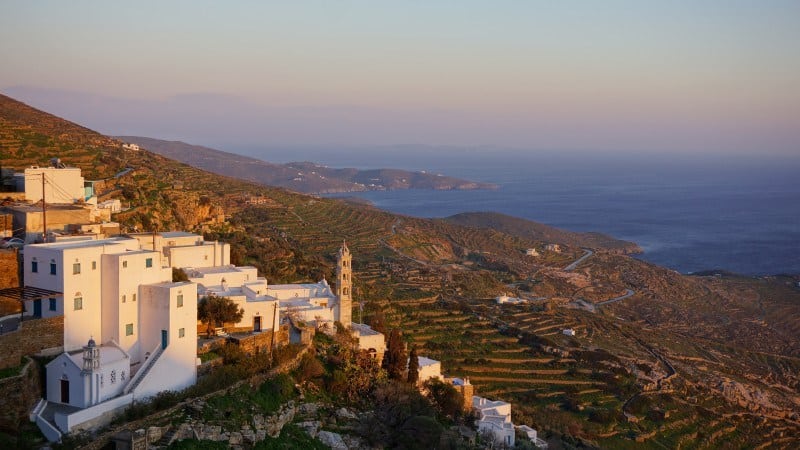 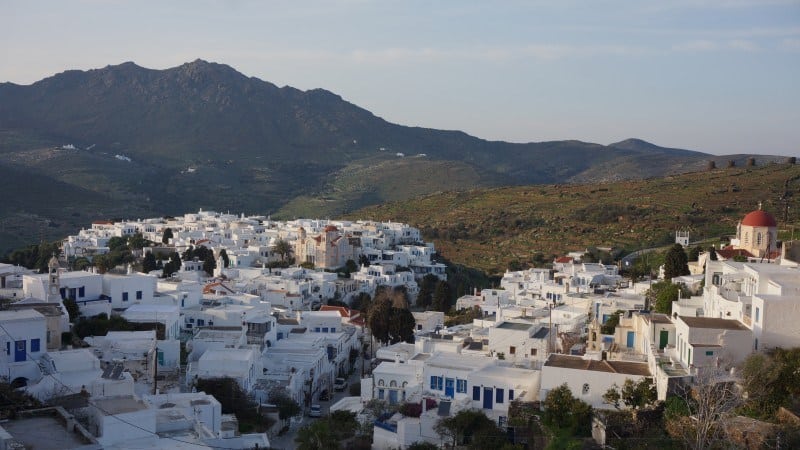 The fountain dedicated to the Greek revolution of 1821, the marble work on churches, houses and the two museums are to be discovered on a walk through the village and show that sculpture enjoys a long tradition in Pirgos. The Art School for Marble Sculpture has supported this tradition since 1955.

Once used by marble exporters, the harbour is today a popular excursion destination. It is a picturesque spot complete with colourful fishing-boats and flanking sandy beaches. Out in the bay is an impressive rock called the Planet. 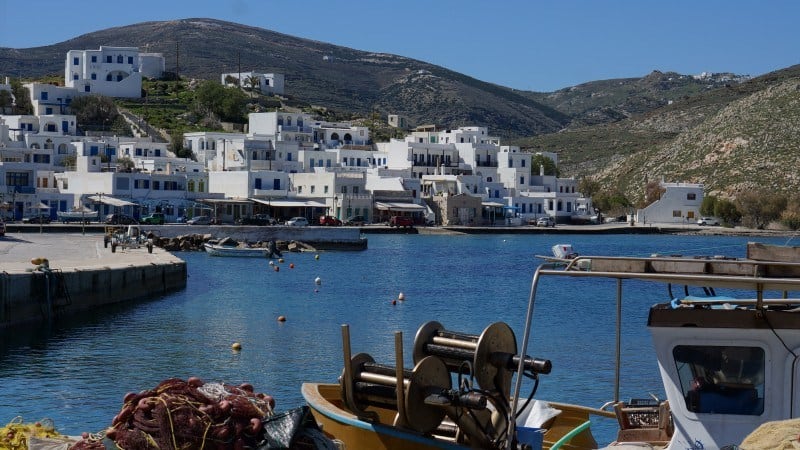 From the town centre this extended stretch of seashore can be reached on foot in just a few minutes. The first part consists of round pebbles followed by a wide sandy beach. Suitable also for jogging and walks.

One of the longest beaches with views over the sea and the neighbouring island of Siros. There is an excavated temple of Poseidon to visit, and later, where the street ends, you will find sand, deckchairs and action.

This is a popular beach with a great view to the islands of Delos & Mykonos and it is one of the longest beaches on Tinos. It is adjacent to the ‘Agios Sostis’ beach. The small chapel of Agia Kyriaki is located at the left end of the beach.

The Bay of Porto with its fine, flat, sandy beach is ideal for those who like to ease themselves gently into the water. The beach is also equipped with sunshades, has sandy waterside trees and view towards Delos and Mykonos.

This southern, rather quiet bay is a short drive from the city. It has pebble as well as sandy beaches, clear water and unobstructed views of the neighbouring island of Siros.

This natural seawater basin has two sand-covered beaches. The smaller one has deckchairs and parasols, a volleyball net, freshwater showers and WCs. Adjoining the bigger strand is a small lake complete with ducks and turtles. Views of the imposing Dragon Island out in the bay.

A very beautiful natural coastal area northeast of the island. The picturesque beach is famous for the crystal clear waters and its rocks, which are sculptured by the wind and the sea.

On the warm, south side of Tinos, directly under the spectacular, cliff-face village of Kardiani is an elongated strand with both pebbles and sand. There are sunshades and wonderful views of the neighbouring island of Siros.

An idyllically located small harbour with adjacent pebble seashore and fisher huts along the water’s edge. A two-minute walk brings you to a sandy beach protected from the north wind and with views of Siros.

There are many more areas left for you to discover… You will be amazed by the wealth of picturesque villages and pristine beaches!!

You will find detailed information about all the destinations mentioned here in the free guide that is provided with your car.